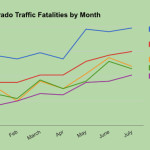 At the beginning if the year, cannabis was re-legalized in Colorado. Those opposed to the move predicted dire results for the Rocky Mountain State, including increased usage and a rise in stoned drivers causing an increase in traffic fatalities.

Those opposed to the re-legalization cite examples of more people testing positive for cannabis in their system, which doesn’t prove the person was actually high at the moment of testing, only that the person had consumed cannabis within the past couple of weeks. Radley Balko writes, “one dubious example, in which the Colorado Highway Patrol and some local and national media perpetuated a story that a driver was high on pot when he slammed into a couple of police cars parked on an interstate exit ramp. While the driver did have some pot in his system, his blood-alcohol level was off the charts and was far more likely the cause of the accident.”

A recent study was released showing the statistical highs, lows and averages for traffic fatalities during the previous 12 years. Traffic fatalities for both 2013 and 2014 are below the average, and 2014, to date, has been safer than 2013, during the same time preiod. Balko adds, “While the number of miles Americans drive annually has leveled off nationally since the mid-2000s, the number of total miles traveled continues to go up in Colorado. If we were to measure by rate, then, the state would be at lows unseen in decades.”

In July, the US House Oversight Committee held a hearing titled Planes, Trains and Automobiles: Operating While Stoned to discuss “the impact of… increasing use of marijuana in our society.” John Mica, who chaired the subcommittee hearing said, “We have no standard test for marijuana for drivers,” adding “We are going to have a lot more people stoned on the highway and there will be consequences.”

Some have called for a zero-tolerance policy, saying the 5 nanograms of THC per milliliter of blood is too permissive. There is however a problem with zero-tolerance. Despite such a policy being thrown out in Arizona, it would essentially mean that anyone who uses cannabis on a somewhat regular basis would be prohibited from driving even if they are not high. Could you imagine the outrage if a legislator proposed prohibiting drinkers or tobacco smokers from driving if those substances had been used in the previous 2-4 weeks? One thing is certain, if no one were allowed to drive, traffic fatalities would approach zero!