A Congressional Research Service Report for Congress states, “Although the November 2012 status vote, termed a ‘plebiscite,’ is nonbinding, Congress will likely be asked to consider the result and may choose to engage in oversight or legislation on the issue. Regardless of the outcome, the plebiscite is likely to be followed closely in Puerto Rico and Washington. Whether initiated by the Puerto Rican people or Congress, any change in the island’s political status would require congressional action.”

On November 6, voters in Puerto Rico will be asked two questions. 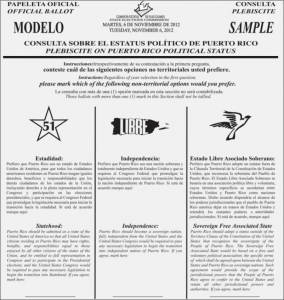 Question 1 asks “Do you agree that Puerto Rico should continue to have its present form of territorial status?” Question 2 states: “Regardless of your selection on the first question, please mark which of the following non-territorial option would you prefer?” With options of Statehood, Independence or Sovereign Free Associated State.

The CRS Reports further states, “The statehood and independence options are essentially self-explanatory, although instructions listed on the ballot provide descriptions of each option. The ‘sovereign free associated state’ option is not a term of art historically associated with the status issue. The term resembles language used to describe ‘freely associated’ states, such as the relationship the United States maintains with the Republic of the Marshall Islands, the Federated States of Micronesia, and the Republic of Palau. As in those areas, the ‘free associated’ option for Puerto Rico would entail, the ballot instructions suggest, independence but ongoing, negotiated ties with the United States.”

It is generally believed that members of the Popular Democratic Party support the status quo or “pro commonwealth” position; New Progressive Party members support statehood; and the independence position is generally associated with the Independence Party. No major party in Puerto Rico appears to be supportive of the free association option.

The CRS Report further states, “Given the prominence of the status issue in Puerto Rican political culture, it seems likely that voters will be familiar with the status issue. How the electorate will choose to vote remains an open question… The PDP, which supports commonwealth status, has urged supporters to boycott question 2. It remains to be seen whether this will occur… How the ballots are tallied could have ramifications for interpreting the results, particularly if no option in question 2 receives a clear majority… Results that indicated the connection between answers in both questions might clarify whether question 2 was boycotted or whether there are indications of “spoiler” votes (e.g., incongruous choices for questions 1 and 2, such as maintaining the status quo but choosing independence). On the other hand, in the absence of additional information, voter intent could still be unclear even with a more detailed count.”

The CRS Report concludes that Congress may not be persuaded to act by one tally method or another.

No matter what the results of this vote or the action taken by Congress, the future of Puerto Rico should be for the people of Puerto Rico, not bureaucrats in Washington, DC to decide.